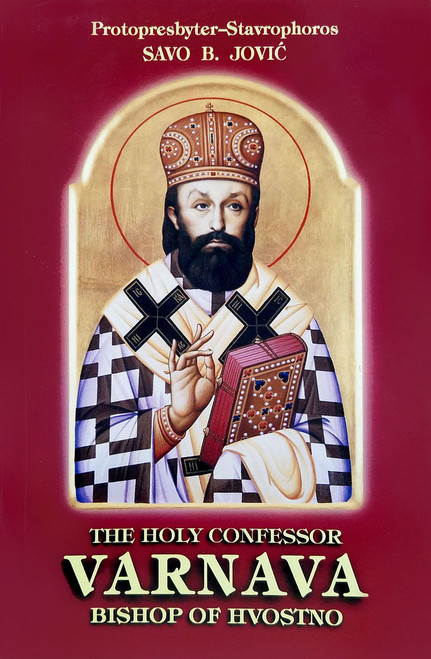 The Holy Confessor Varnava, Bishop of Hvosno, Belgrade 2006, pp. 315 With this work, the author sheds light on the life path of the Holy Confessor Varnava, Bishop of Hvosno (Serbia), from his birth on January 31, 1914, in Garry, Indiana, USA, to his martyr's death in 1964, in the Monastery Beočin.
Varnava was one of the numerous victims of the Communist regime of the former Yugoslavia. Graduated from the Faculty of Orthodox Theology in Belgrade in 1937, he was elected and ordained a bishop in 1947, when he was also arrested, and then sentenced to eleven years' imprisonment. He served his sentence in Sarajevo, Stolac, Zenica, and Sremska Mitrovica, followed by house arrest in the monasteries Vavedenje, Krušedol, Gomionica, and Beočin, where he died under very suspicious circumstances and was buried. In addition to scantily known facts, from the relatively poor and sparse archive materials, the author reveals in the light of day, Varnava’s previously unknown homilies and letters, as well as testimonials of his acquaintances and co-sufferers. Thus for the first time, we now have a monograph about this Saint Varnava, which illuminates his image as a confessor. His name has been added to the Diptychs of Saints of the Church on May 15, 2005.

Akolouthia of Our Holy and God-Bearing Father Justin of Celije, The New Theologian and Confessor

Author: Dragoslav Dragutinovic The Holy Assembly of Hierarchs of the Serbian Orthodox Church during

Akolouthia of Our Holy and God-Bearing Father Justin of Celije, The New Theologian and Confessor

To The Glory of God The Father: The Lives of Saint Mardarije of Libertyville and Chicago and Saint Sebastian of San Francisco and Jackson and Their Selected Writings

Service to Saint Sebastian of San Francisco and Jackson

Life According to the Gospel

By Patriarch Paul It is not easy to teach the Gospel. One of the few among our co

Author: Predrag Cicovacki We long for love and to be loved. We also fear love because we risk betray