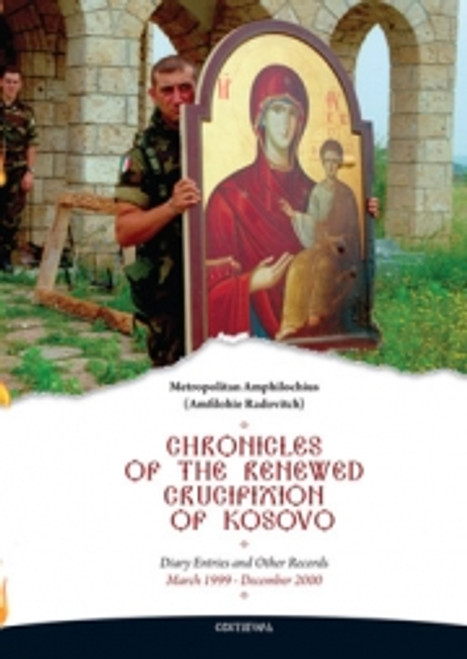 Diary Entries and Other Records March 1999 - December 2000 In the words of one of endorsees of this profoundly moving Diary, Mr. James Bissett, Canadian ambassador to Yugoslavia (1990-1992), who emphasized its significance as follows: "The twentieth century has not been kind to Serbia or the Serbian people. Wars and suffering have plagued the nation for the best part of the century... This book stands out as a remarkable account of a shameful episode in the history of the last decade of the twentieth and the first decade of the twentyfirst century. The story has not ended, and the work of the Metropolitan will be continued. Serbia and the Serbian people will once again regain their self-respect and confidence.

These Chronicles should serve as a "book of martyrs" whose suffering will act as a beacon to future generations of young men and women of Serbia to ensure that nothing like it will happen again". An excerpt from Chronicles of the Renewed Crucifixion of Kosovo – Diary Entries and Other Records March 1999 – December 2000 by Metropolitan Amphilochius (Radovitch): "We visited once again the burned temple of the Mother of God. When we entered the temple, the embers of the burned sacred books and icons were still smoldering. The Holy Chalice wrapped in a towel was shining in the embers, miraculously protected from the fire. Suddenly we heard a strange noise coming from behind the altar railing, on which you could still discern the figures of Christ and the Theotokos, blackened by the fire, with drops of condensed resin on their faces. “Maybe the Albanian who burned the temple hid himself in the altar area.” I thought this to myself, expecting a shot from that direction at any moment. When I finally cautiously peeked through the southern door, I saw a terrified lamb which trembled like an aspen leaf in the wind in the soot of burned utensils under the Altar Table!

Those days everything was in flames in the deserted village. Only the shots echoed, and the eerie shadows of the Albanian troikas dressed in black moved around, destroying everything that was Serbian. And the lamb? It ran away early in the morning by the burning houses and corrals, flying to the altar to save itself. As I watched it trembling under the altar, it seemed to me I was watching the Christ Himself, “the Lamb slain for the life of the world” offered for centuries right on this very altar as a Bloodless Sacrifice."

Holy Emperor Constantine and the Edict of Milan

By: Bishop Atanasije Jevtich  The publication of this beautiful pocket-size, full-color, Engli