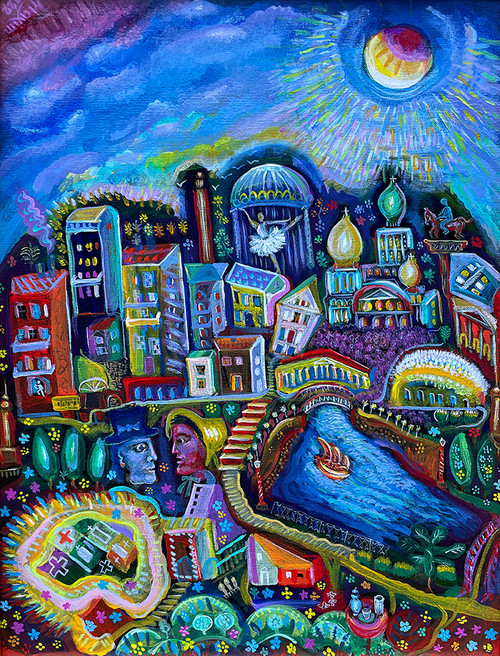 Dostoevsky spent much of his life in St. Petersburg, which became the backdrop to his many novels. Like in his books so also in this painting, Dostoevsky's characters inhabit the streets of St. Petersburg and come to life. Here one can recognize the house of Raskolnikov and Sonya Marmeladova.

In the "White Nights," he conveys the experience of his hero, who walks in the streets of St. Petersburg during the so-called "White Nights." He loves the city at night and feels comfortable in it. He drew his emotions from people: if they were content, he was content; if they were disheartened, he was discouraged. As he walked, the houses would talk to him and tell him how they were being renovated, painted a new color, or torn down.

Dostoevsky tells the story of a relationship between a "dreamer" and a young woman called Nastenka. There is something special about her, and he is very curious. When he hears her scream, he intervenes, saving her from a man who is harassing her. When she presses him to tell her more about him, he suggests he is a "dreamer" type. "'The dreamer,'" he explains, "is not a human being, but a creature of an intermediate sort." He dreams of everything, from befriending poets to having a place in the winter with a girl by his side. The "dreamer" gradually realizes that despite his assurance that their friendship would remain platonic, he has inevitably fallen in love with her. The narrator becomes hopeful at this prospect. As they walk, they pass by a young man who stops and calls after them. He turns out to be Nastenka's lover, and she jumps into his arms. Soon, he receives a letter from Nastenka, in which she apologizes for hurting him and insists that she will always be thankful for his companionship. The short story ends with the "dreamer's" words to Nastenka: "May your sky be always clear, may your dear smile be always bright and happy, and may you be forever blessed for that moment of bliss and happiness which you gave to another lonely and grateful heart ... Good Lord, only a moment of bliss? Isn't such a moment sufficient for the whole of a man's life?"

"Christ and the Grand Inquisitor"

"Christ and the Grand Inquisitor", acrylic on canvas, by Bishop Maxim, 2022

"The Endless, Blue Circle with a Cross in It—Hieromonk Atanasije"

"The Endless, Blue Circle with a Cross in It—Hieromonk Atanasije", acrylic on canvas, by Bisho

"Saint Isaak The Syrian and Dostoevsky"