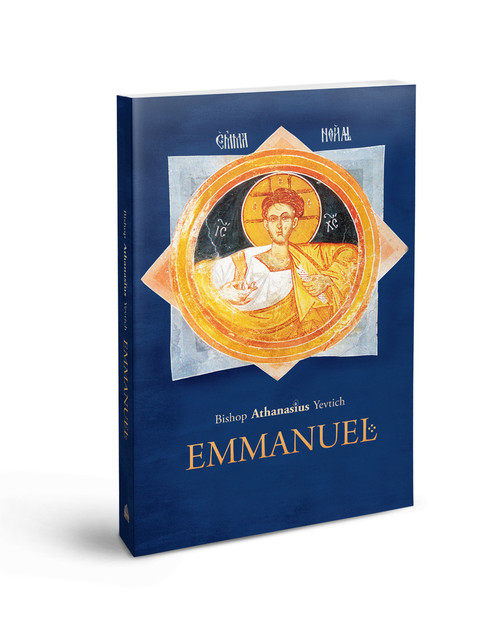 The Only Begotten and Firstborn among Many Bretheren
By: Bishop Athanasius Yevtich
Edited by the St. Herman of Alaska Monastery

The Only Begotten and Firstborn among Many Brethren In Emmanuel, the second anthology of Bishop Athanasius’ articles to appear in English, His Grace explores themes of Orthodox Christology, soteriology, ecclesiology, and epistemology. How can we know Who God is? How can we know who we are, as human persons created in His image and likeness? How can we become one with Him? Bishop Athanasius examines these and other foundational questions in depth in this volume, drawing from a wealth of Scriptural and patristic sources.

In discussing diverse theological subjects, he always returns to his overarching theme: the communion that man can have with God through Jesus Christ the God-man, within Christ’s Church and above all in the Holy Eucharist. His exquisite and unique way of engaging the reader in mutual dialogue, with the living Eucharistic experience, permeating his every thought, instills in the reader a burning desire for that communion.

Atanasije Jevtić (secular name: Zoran) was born on January 8, 1938, near Sabac. He graduated from the Orthodox seminary in Belgrade, along with Bishops Amfilohije and Lavrentije. While studying at the Orthodox Theological Faculty, he served a two-year military service. Then, he was ordained a monk with the blessing of the Bishop of Sabac-Valjevo Jovan Velimirovic (St. Nikolaj Velimirovic’s niece), by St. Justin Popovic in Pustinja Monastery near Valjevo, in 1960. He graduated from the Orthodox Theological Faculty in 1963. He then (1964) went to Constantinople (Halki) to study theology and attended courses in the Theological Faculty (Athens). Under the mentorship of Professor of Dogmatics, Dr. Jovan Karmiris, he defended a PhD thesis in Greek on the topic: “Ecclesiology of Paul the Apostle after St. Chrysostom” (1967). In autumn 1968, with the blessing of the Serbian Orthodox Church, he went to Paris to teach at St. Sergius Orthodox Theological Institute. After one year, he became professor of Patristics at the Institute. While in Paris, he occasionally attended lectures on Patrology at the Roman Catholic Theological Faculty (Institut Catholique de Paris) and some lectures on Byzantine literature at the Sorbonne (Hautes Études). As a professor at the St. Sergius Institute, he participated in the First Theological Conference of Orthodox Theologians in America, in September 1970 in Boston (Holy Cross). In 1972, he came back to Serbia at the Orthodox Theological Faculty, to teach History of the Christian church, History of the Serbian Orthodox Church and Patrology. He has published about a thousand scientific papers and fifty books. He became involved in the cultural movements of the country, with his open speeches, excellent knowledge of theological and philosophical thought and his erudition and versatility, he gained great sympathy and support – especially from youth. He served as Bishop of Banat from 1991 to 1992 and as Bishop Zahumlje and Herzegovina from 1992 to 1999. Due to a serious injury, he retired from archpastoral duties in 1999. During the civil war, he helped the people, the army, orphans, refugees, the wounded and other needy people and the suffering in many ways, restoring the Orthodox faith in Herzegovina through mass baptism and communion. He was a participant in many domestic and international scientific gatherings in the field of church history, theology, philosophy and Christian culture. At the same time, he collaborated in many church and secular journals at home and abroad. Bishop Atanasije has published many translations from Ancient Greek, Ancient Slavonic, Hebrew, French, Russian and other languages. His theological, anthropological, patrological, church-historical works go into all periods of the Church’s history and cover almost all the important issues of Orthodox biblical theology. After the fall of communism in Yugoslavia, he actively worked to strengthen the Orthodox faith among people. Because he never agreed to compromises, Bishop Atanasije was often in conflict with the authorities, mostly secular ones. He was not a politician in a cassock, but a fiery orator. His spoken words are feared by everyone, even by himself, as one journalist said in 1999. He was one of St. Justin Popovic’s spiritual children. The others are Metropolitan Amfilohije (died of COVID-19 in October 2020), Bishop Artemije (who was defrocked in 2010 and excommunicated in 2015, died of COVID-19 in November 2020), Bishop Irinej of Backa (tested positive for COVID-19 in February 2021). Bishop Atanasije’s well known spiritual children are: physicist Emmanuel Sarris, iconographer Stamatis Sklirs (holyicon.org), Bishop Grigorije Duric, Bishop Maxim Vasiljevic, Bishop Dimitrije Radjenovic, etc.
×

The One and The Many: Studies on God, Man, the Church, and the World Today; Ioannis Zizioulas L'uno e i molti / Saggi su Dio, l'uomo, la Chiesa e il mondo di oggi

The One and The Many: Studies on God, Man, the Church, and the World Today; Hardbound

Holy Emperor Constantine and the Edict of Milan

By: Bishop Atanasije Jevtich  The publication of this beautiful pocket-size, full-color, Engli

By: Nenad Milosevic Through his methodical study of the sources (including a considerable number o