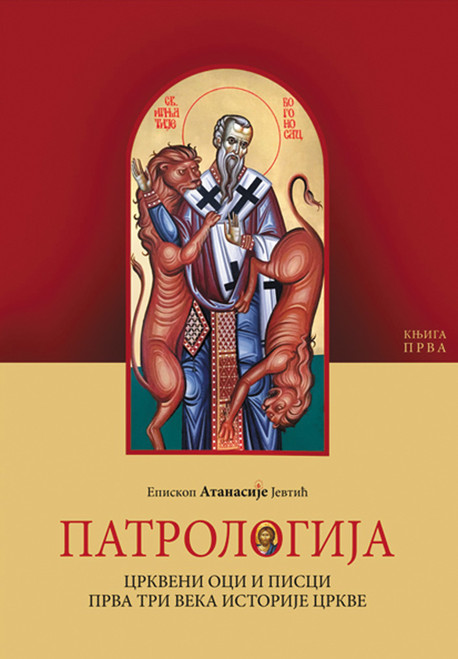 Collection of all five volumes!

Vol 1: This Volume encompasses ecclesiastical Fathers and writers of the first three centuries of the Church, their life, teaching, theology and original texts. As a sui generis textbook the volume contains historical, hagiographical, liturgical, canonical and other sources and insights into the life of the early Church: from Didache, The Epistles of Barnabas, Epistle to Diognetus, the works of Clement of Rome, Ignatius of Antioch, Polycarp of Smyrna, through Hippolytus of Rome, Apologists Justin, Athenagoras, Melito of Sardis, Theophilus of Antich, et al.), concluding with great writers Irenaeus of Lyons, Tertullian, Origen and others.

Vol 2: This Volume contains ecclesiastical Fathers and writers of the fourth and fifth centuries of the Church, their life, teaching, theology and original texts. As a continuation of Patrology vol 1, this volume contains historical, hagiographical, liturgical, canonical, and other sources and insights into the life of the Church and the thoughts of Palestinian, Alexandrian, Cappadocian, Antiochian, Constantinopolitan, Syrian-Armenian, and Monastic Fathers, including heretical writers as well.

Vol 3: This volume presents the period from the Council of Chalcedon (451) until St. Photius and his disciple, Cyril, and Methodius. It offers a brief history of the 5th, 6th, and 7th Ecumenical Councils and their decisions. The great Justinian I and Corpus Areopagiticum are explored extensively together with the post-Chalcedonian theologians (known as Neo-Chalcedonians: two Leontii) and Patriarchs of Constantinopole. Further, the Fathers of Holy Land and Sinai are surveyed with two leading theologians, St. Sophronius of Jerusalem and Maximus the Confessor. The theology of the icon is presented through the teachings of St. John Damascene, Theodore Stoudite. The book concludes with St. Photius and his disciple, Cyril and Methodius, together with Church hymnographers and Isak the Syrian.

Vol 4: This volume surveys the Latin and Western Fathers and writers from the Council of Nicaea until the schism in the 11th century. The author offers some fundamental remarks on the theology, sources, and influence of the Latin Fathers, in particular, Ambrose, Hilarius, Lactantius, Rufinus, Jerome, John Cassian, Cassiodorus, Augustine, Pope Gregory the Great, Martin, Anselm of Canterbury, etc. The most important theological figures of this period had the most influence on the early medieval church. Those fathers who wrote in Latin are called the Latin (Church) Fathers.

Vol 5: This volume surveys the Eastern Fathers and writers from the 9th to 15th centuries. In the beginning, two students of St. Photius are examined, Aretha of Caesaria and Patriarch Nicholas the Mystic, followed by two Ohrid Saints and writers: Clement and Theophilactus. Then there are two Byzantine philosophers, Mihail Pselos and Jovan Italos. After them are the names of John Mavroupous, Athanasius of Athos, Symeon the New Theologian, Niketas Stethatos, Paul Evergetinos, Patriarchs Michael Cerularius and Peter III of Antioch, Nicholas Bishop of Methonos, Symeon Metaphrastes, Euthimius Zigavinos, Callistus and Philotheus Kokinos, Sergius of Radonjez, Nil Sorski, Nilus and Nicholas Kavassilas. The following is a larger group of notables of writers from the Balkans: Saint Sava of Serbia, and his biographers Domentian and Theodosius, Grigory of Sinai, Nicephorus Kallistus, Saint Gregory of Palama. The Byzantine Interpreters of the sacred canons are also included Aristine, Zonaras, and Balsamon.

Eastern Fathers of the Church Fathers from St. Photius the Great to the Fall of ConstantinopleСве

The Only Begotten and Firstborn among Many BretherenBy: Bishop Athanasius Yevtich Edited by the St.