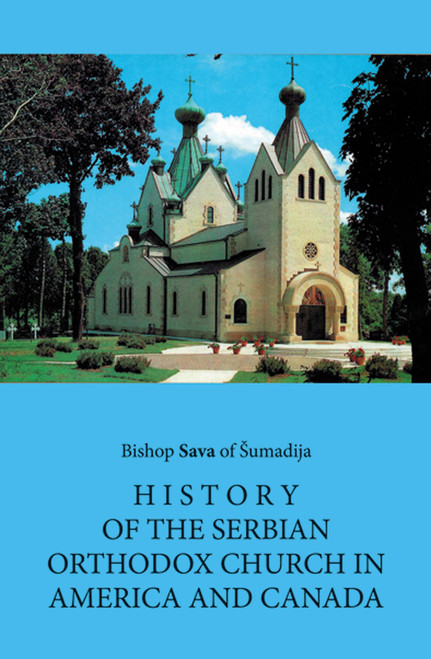 By: Bishop Sava Of Sumadija
Published by: Kalenic, Diocese of Sumadija

The history of the Serbian Orthodox Church in America and Canada is of interest not only for Serbian history, but American and Canadian history as well. Bishop Sava's book, originally written and published in the Serbian language, is now available in English as well. Therefore, it is exciting that Nicholas Borota, an admirer of Bishop Sava, conceived and pursued the idea of having Bishop Sava's book translated and published in English. In fact, much of the book is documentary in nature - with lengthy quotations provided from documents held in different official archives of the Serbian Orthodox Church on both sides of the Atlantic. The history of the trials, tribulations and triumphs of Serbs in America and Canada is told in their own words, as they struggled to attain their goal of establishing a Serbian diocese of their own. And yet, only a hierarch of Bishop Sava's intellect and status, only a hierarch who had lived and fulfilled his calling in both the old and new worlds, could have collected, organized and presented this material in such a manner forthright and with no attempt to smooth over the occasional bumps in this history.

Within the pages of this remarkable work, our readers will gain familiarity with many important factors such as: the immigration of Serbs in America and Canada; the Serbian spiritual mission; Bishop Nikolaj of Ohrid and his first visit as well as later reports and proposals; and the appointment of the first Serbian Bishop in America, Archimandrite Mardarije. During those formative years we learn about the education of the candidates to the priesthood, the establishment of parishes throughout the US and Canada, establishment of the first Serbian Orthodox Monastery in North America, St. Sava in Libertyville, and many more developments in our not so distant past.

Author: Dragoslav Dragutinovic The Holy Assembly of Hierarchs of the Serbian Orthodox Church during