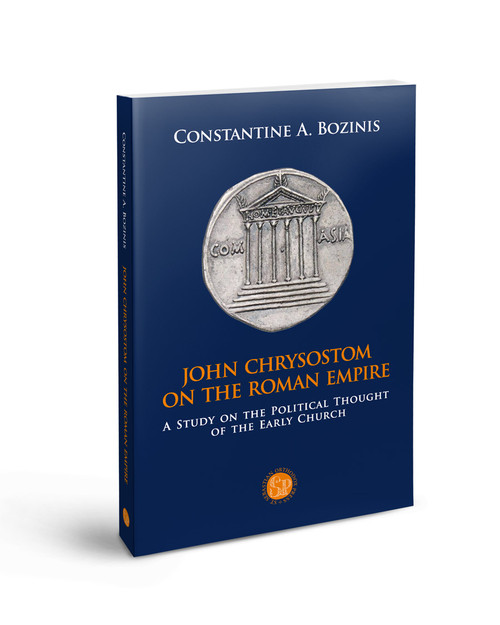 During the 20th century, the patristic scholarship was only able to address the political thought of John Chrysostom in a piecemeal fashion. The present study constitutes the first systematic attempt to remedy this situation by providing a more all-encompassing view of the great Church Father's thinking about public life in Christian antiquity. Its first part is devoted to Chrysostom's perception of the relationship between Church and state. His view of his time's central state authority, the Roman Empire, is carefully reconstructed from select passages in his homiletic corpus. Particular care is taken to highlight the substantial differences between John Chrysostom and Eusebius of Caesarea insofar as their attitude toward the Roman Εmpire is concerned; these differences become visible primarily in the way that the two ecclesiastical authors make use of the motif of "synchronic parallelism," that is to say, the temporal coincidence of Jesus' birth with Octavius Augustus' autocracy and the spread of the Pax Romana throughout the entire Mediterranean world.

On the other hand, in the second part, careful examination is given to the influence exerted by the Greek philosophers and the authors of the classical and post-classical periods on Chrysostom. Employing the traditional comparative source analysis (Quellentuntersuchung), Chrysostom's debt to Plato, Demosthenes, and influential representatives of the Second Sophistic emerges from a careful reading of the primary texts. Lastly, in the epilogue, the conclusions drawn in the two parts of the study are utilized to define with the highest degree of precision John's place as a political thinker within the broader context of the various schools and currents of political thought in the ancient world.

The Church at Prayer

By: Archimandrite Aimilianos of Simonopetra The works collected in this volume reflect the importanc

By: Nenad Milosevic Through his methodical study of the sources (including a considerable number of

By: Bishop Danilo Krstic In this meandric study the author has detected the semantic changes and enr

In stock! Published by: Sebastian Press for USA and Canada, Indiktos and Holy Convent of The Annunc

Author: George C. Papageorgiou The Little Prince beckons us to take a fairy tale trip, into the worl

By: Nenad Milosevic Through his methodical study of the sources (including a considerable number of

By: St. Nikolai of Ohrid and Zhicha (Velimirovic) Lives o

By: Archimandrite Aimilianos of Simonopetra Reflections on life in God Elder Aimilianos played an