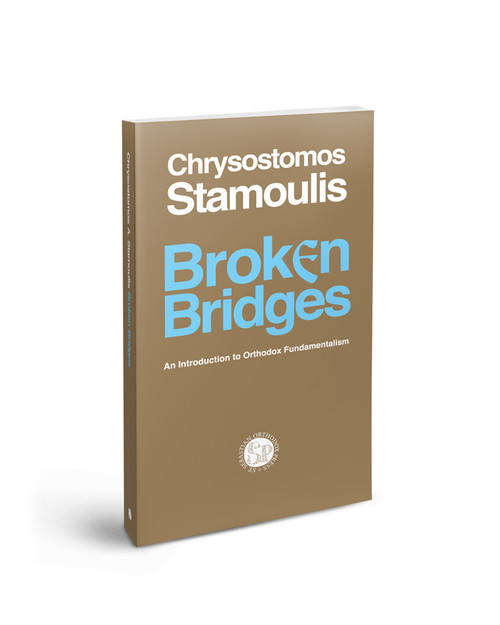 Fundamentalism is a dominant phenomenon in modern culture, which has been experienced worldwide, becoming the object of manifold investigation. It is the attitude that aims to abolish all different points of view and violently establish the only point of view: that of the elect, whether of the individual elect or the group of elects. Within Orthodox fundamentalism, reference is often made to patristic consensus, which constitutes an essential prerequisite for church unity operatives. The author believes that sincere dialogue requires respect for difference and the reception of otherness. Convergences and divergences, rules, and exceptions make for a fascinating mosaic, which, once more, evinces the existentialist character of theology and its ineluctable struggle to endow life and existence with meaning.

Born in Chalkidiki, Greece, Chysostomos Stamoulis studied Theology at the Aristotle University of Thessaloniki (Greece), and the Universities of Belgrade (Serbia) and Durham (UK). He is the Professor of Dogmatic Theology at the Faculty of Theology of the Aristotle University, and teaches the core module of Dogmatic and Symbolic Theology, as well as other optional modules. Stamoulis has lectured and held visiting positions in Europe, Asia, and the United States. His monographs include “What’s the Fox seeking in the Fair”? Essays on the Dialogue of Orthodoxy with Politics, Culture and the City (Athens, 2016); As if I were a Stranger and a Wanderer, Or, Incarnation: The Migration of Love, Athens (2011); Love and Death. An Essay on the Incarnation (Athens, 2009); Lot’s Wife and 20th-Century Theology (Athens, 2008, 2014); Sacred Beauty. An Introduction to the Philocalic Aesthetics of Orthodoxy (Athens, 2004, 2005, 2008). In 2011-2013 and 2013-2015 he served in office as Head of the Department of Theology. An accomplished musician, Stamoulis has released five albums, and regularly collaborates and performs with artists in Greece and abroad. Since 1991 he has been the principal conductor of the St. John Chrysostom Youth Choir and Orchestra in Thessaloniki.
×

"The Old Mostar Bridge and the Cathedral of Resurrection"

"The Old Mostar Bridge and the Cathedral of Resurrection", acrylic on canvas, Bishop Maxim, 2022A ci

Soul and Psyche as a Surprise; Psychoanalysis and Orthodox Theology in Dialogue

Edited by:  Evdoxia Delli and Vasileios ThermosThis volume signifies the first opportunity of

Re-Discovering Mary: The Orthodox Understanding of the Mother of God

By: Lawrence R. Farley In the history of the Bible and the life of the Church, there is a historica

By: Steven-John Harris  Psychologically speaking, madness keeps a person from thriving in life,

By: Radovan Bigovic Rare are the books of Orthodox Christian authors that deal with the subject of p