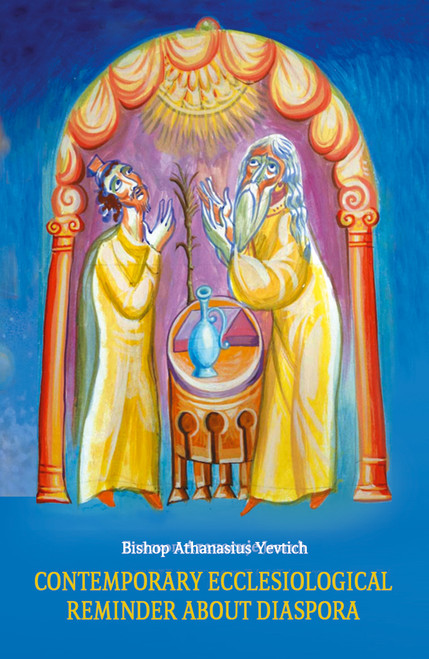 History and analysis of so the called "American Schism" (1963-1992) and recommendations for moving beyond. This book discusses crucial questions regarding the Diaspora, because ecclesial organizations of the Orthodox Church abroad are presented with at least two problems: a) review of our interpretation and comprehension of the Church, specifically through the lens of the last couple of centuries' existing convictions, and b) addressing the question of the Church's mission in the World.

This book was written in a now already distant year of 1990. This is its first publishing since the original intent was to have it available only for the hierarchs of the Holy Synod for the purpose of overcoming the so-called “American schism” within the Serbian diaspora. Presently, as the Serbian schism has been liturgically and administratively vanquished, it is understandable and desirable to have this valuable research available to the public. At the request of the Holy Synod, back then Hieromonk Atanasije acceded to collect all relevant documents in reference to painful schism in Serbian Diaspora, placing them in the light of Orthodox Ecclesiology and Holy Tradition, which was the only way to face it properly and bring it closer to healing. The readers will notice how Bishop Atanasije analyzed responsibly, and impartially the whole question of schism, and at the same time provided comprehensive, integral and thorough ecclesial economy, recommendations for solutions.

This book is the result of his Christ-loving and Church-loving labor. A tangible result of Atanasije's ecclesiological recommendation was the Eucharistic renewal, communion, and reconciliation which was established on the Feast of the Meeting of the Lord in the Temple, February 15 1992. At the Cathedral in Belgrade, His Holiness Patriarch Paul and hierarchs of the Holy Episcopal Assembly celebrated for the first time together since the schism, with Metropolitan Iriney (Kovacevic), up until then, schismatic bishop in Diaspora. Finally, on May 21. 2009, the Holy Assembly made a decision about conclusive administrative unity of the Serbian Orthodox Church in North and South America. In the same time this book reveals crucial question regarding Diaspora, because ecclesial organization of the Orthodox Church abroad presents itself with at least two problems: a) a check-up of our interpretation and comprehension of the Church, specifically of the last couple of centuries existing convictions, and b) a question of the Church mission in the World.

Out of stock  By: Krinka Vidakovic-Petrov THE GREAT WAR 1914-1918 The Kingdom of Serbia,

By: Metropolitan Amphilochius (Radovich) Published by: Svetigora Diary Entries and Other Records

By: Lawrence R. Farley The first eleven chapters of Genesis contain theological truths which the wo