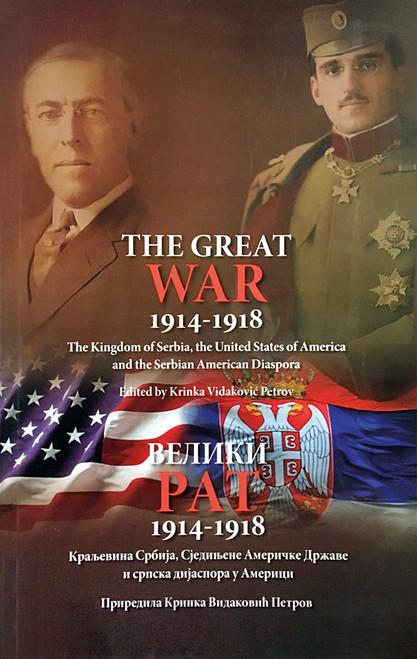 THE GREAT WAR 1914-1918
The Kingdom of Serbia, the United States of America, and the Serbian American Diaspora

This anthology commemorates the centennial of “An Appeal to Americans to Pray for Serbians” issued July 26, 1918 by the administration of President Woodrow Wilson. The appeal recognized the four years of struggle, hardship and sacrifice of the Serbian people following the July 28, 1914 declaration of war by Austria-Hungary.
This book is dedicated to the Great War, an event that shook the world one hundred years ago. Within this vast historical frame-work, this book focuses on the relationship between two Allies—the Kingdom of Serbia and the United States of America, including the role of the Serbian American Diaspora. In the longer historical perspective, World War One, World War Two and the Cold War appear as three global events marking the 20th century and changing the world at the threshold of the new Millennium.
The chapters in this book deal with general issues regarding Serbia’s role in the Great War, beginning with the event that would trigger the war and put the small town of Sarajevo on the world map. An exceptional chapter in this book is dedicated to Serbian American war volunteers, who began enlisting and going to war-torn Serbia and Montenegro in 1914.
This book offers a wealth of information as well as a fascinating narrative of the human urge to resist, survive, and be free to live and love. It provides insights into the relations between two countries – the Kingdom of Serbia and the United States of America.

By: Mira Radojevic and Ljubodrag Dimic Published by: Belgrade Forum for the world of equals Serbi

By: Metropolitan Amphilochius (Radovich) Published by: Svetigora Diary Entries and Other Records