"The Last Look of Nastasya Filippovna" 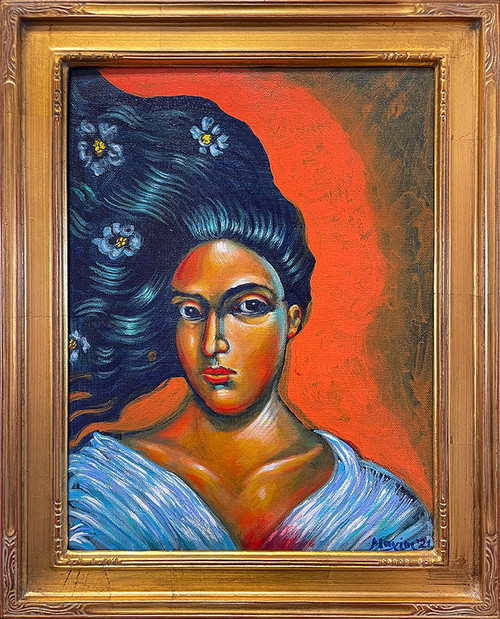 "The Last Look of Nastasya Filippovna"

"The Last Look of Nastasya Filippovna", from Dostoevsky's The Idiot, acrylic on canvas, by Bishop Maxim, 2021

The painting depicts Nastasya’s death scene. Rogozhin stabbed her under the left breast, and there was no more than half a tablespoon of blood; the bleeding was internal. Without a doubt, Nastasya is the most dramatic and complex character in the novel The Idiot; she steers the course of this novel and the fate of Prince Myshkin and Rogozhin. No one in The Idiot can understand Nastasya Filippovna’s abrupt mood changes. Nastasya is highly emotional, full of guilt, and out for revenge. Prince Myshkin insists that Nastasya is not what she seems; she is more kind than her haughty demeanor indicates. One can see suffering beauty in her eyes. She sees an absurd morality play with good and evil on either side. So, not knowing what role she must play, she plunges into the comedy and turns the course of events upside down. Nastasya’s imminent death hovers ominously throughout the novel. What makes the scene horrible is not the murder but Myshkin’s comforting of Rogozhin. Myshkin’s goodness and compassion are more terrifying than Rogozhin’s murder of Nastasya. Dostoevsky shows us the ultimate in goodness, and it is paradoxical: Myshkin’s embracing the murderer, forgiving him as it were, weeping on his cheek as though in sorrow but also in relief that, at last, the fate of the three has unraveled itself.

We invite you to participate in another almsgiving opportunity since all proceeds go to Diocesan charity program. With any painting purchase you will receive a formal acknowledgement letter to claim tax deduction. Your generosity will make a lasting impact on peoples in need.

By: Lawrence R. Farley The first eleven chapters of Genesis contain theological truths which the wor

"Magic in the Moonlight"

"Magic in the Moonlight", acrylic on canvas, 2018 by Bishop Maxim Bathed by the light of the moon.

Parenting in Repentance: Growing Together in Love, Gratefulness, and Joy

The Eucharist and the Kingdom of God

By: John D. Zizioulas, Metropolitan of Pergamon What we have in the Eucharist is not a flight or d